Today, The Phillies Catching Depth Was On Display At Ashburn Field

Today Phillies coaches Ernie Whitt and John McLaren put eight catchers, who are working in the major league camp, through a vigorus workout hitting and catching pop-ups on Ashburn Field.

The Phillies appear to have good catching depth with veteran Carlos “Chooch” Ruiz, one of only two players remaining from the 2008 World Series champs, left on the roster.  Ruiz has reported in great shape and looks ready for the 2016 season.

Behind Ruiz, Cameron Rupp has earned more playing time showing a power bat at the end of the 2015 season.  They look to be the catchers who will start the season for the Phillies.

At AAA, the Phillies have brought in major league veteran A.P. Arencibia for catching depth.  He will likely team with left hand hitting Logan Moore who hit .275 in the second half for Lehigh Valley.  He showed pop in the Dominican Winter League hitting five doubles, three triples and two homers in only 87 at bats.  Moore has a strong arm throwing out over 50% of the runners attempting to steal last season between Reading and Lehigh Valley.

It looks like Jorge Alfaro and Andrew Knapp will share time catching for Reading.  Alfaro was injured most of the 2015 season but has a powerful bat and arm.  The switch-hitting Knapp hit over .400 during a long stretch for Reading after his call-up from Clearwater last season.  He tailed off hitting only slightly above .200 in the Eastern League playoffs and in the Arizona Fall League.  Report have surfaced that Alfaro might see some action in right field and Knapp did play some first base in the AFL.  If Reading goes with a three man catching staff, Gabe Lino might be the third catchers for them to allow Knapp and Alfaro to either DH or play the other positions.

The eight catchers on the field at Ashburn today was 20 year-old Californian Edgar Cabral who hit .281 for the Gulf Coast League Phillies after being drafted in the 11th round of the 2015 draft.  He could be catching in Clearwater or Lakewood this season.  The other top young catcher in the Phillies system is 20-year old Deivi Grullon who is not expected to arrive from the Phillies academy in the Dominican Republic until March 3rd with the rest of the young Caribbean pitchers.

Watch HERE and HERE for videos of batting practice featuring Moore and Knapp as well as pop-up drills from today of the Phillies catchers.  Below are several of Baseball Betsy’s pictures of the catching drills from today’s workout: 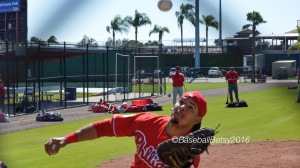 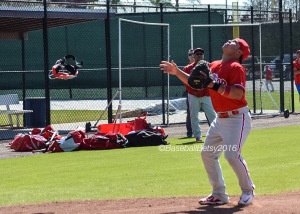 Carlos Ruiz throws his mask while catching a pop fly 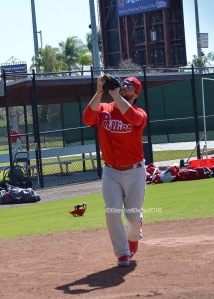 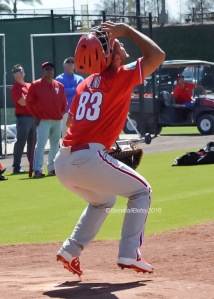 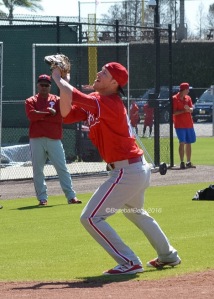 Logan Moore snags a pop up 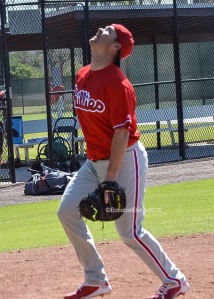 Andrew Knapp waits for the pop up to come down.

I have been a faithful Phillies follower all my life. Today I am most intrigued by those players in the minor league system who work every day of the year to make it to the Show. This is what this blog is mostly all about. To read more, click here: https://baseballross.wordpress.com/2012/02/05/how-i-got-started-in-baseball/
View all posts by Baseball Ross →
This entry was posted in February 2015 and tagged Andrew Knapp, Baseball Betsy, Baseball Ross, Cameron Rupp, Carlos Ruiz, Edgar Cabral, Gabriel Lino, J.P. Arencibia, Jorge Alfaro, Logan Moore, Philadelphia Phillies, Phillies 2016 spring training, Phillies catchers. Bookmark the permalink.

1 Response to Today, The Phillies Catching Depth Was On Display At Ashburn Field