The Clearwater Threshers Take Advantage Of The 314 ft. Sign At Steinbrenner Field

It was a battle for first place in the Northern Division of the Florida State League in the twilight at George M. Steinbrenner Field, Saturday evening in Tampa.  Threshers won a good game 5-2 over the Tampa Yankees thanks to strong pitching and its hitters taking advantage of the 314 ft. sign down the right field line.  They now take a two game lead into today’s doubleheader with the Yankees at Bright House.

They hit the ball over, at and in front of  the 314 ft. sign.  Third baseman Derek Campbell just cleared it for home run in the second inning for what turned out to be the winning run.

Later in the inning Cody Asche hit a towering two-run homer into the party deck to the left of the .314 sign, Watch HERE, after Scott Kingery doubled to right to seal the game early. 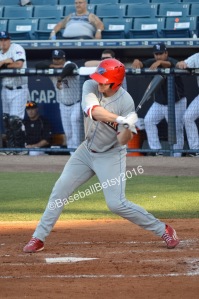 Later in the game Andrew Pullin drove a ground rule double down the right field line in front of the 314 ft sign. Watch HERE.

And not to be out done late in the game, Malquin Canelo hit a high fly ball that the Yankees rightfielder caught as he backed into the 314 ft sign.

Just like Yankee Stadium as Zach Green learned, you can hit long ball nearly 400 ft. but it is just a long out to left center at Steinbrenner.  Watch HERE 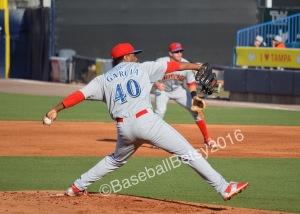 The Threshers lefty Elniery Garcia was strong in allowing only two runs and striking out five over six innings against the team with he highest batting average in the FSL to go 3-1 on the season. This season the 21-year-old Garcia has struck out 32 in 35.2 innings with a 2.27 ERA, a o.95 WHIP and opponents are just hitting .194 off of him.   Watch his first three strikeouts HERE, HERE and HERE.

As usual the bullpen was shutdown as Ulises Joachim came on for a two inning hold and closer Joely Rodriguez struck out two in the ninth for his third save of the season.

The Phillies minor league players have been taking advantage of the minor league ballparks that are designed to reflect the dimensions of the major league teams.  Earlier in the season Rhys Hoskins took advantage of the “Green Monster” in Portland, Maine to hit a home run against the Red Sox AA farm team.

The .314 sign down the right field line at Steinbrenner Field reflects the same dimensions as in  Yankee Stadium in the Bronx.  And most of the Threshers hitters took advantage of it last night to hold on to first place in the Florida State League.

I have been a faithful Phillies follower all my life. Today I am most intrigued by those players in the minor league system who work every day of the year to make it to the Show. This is what this blog is mostly all about. To read more, click here: https://baseballross.wordpress.com/2012/02/05/how-i-got-started-in-baseball/
View all posts by Baseball Ross →
This entry was posted in May 2016 and tagged Andrew Pullin, Baseball Betsy, Baseball Ross, clearwater Threshers, Cody Asche, Derek Campbell, Elniery Garcia, George M. Steinbrenner Stadium, Philadelphia Phillies, Zach Green. Bookmark the permalink.