It was an interesting Saturday Night at Bright House Field as the Clearwater Threshers managed to hang on for a 2-1 win over Lakeland to be tied for first place with Dunedin in the Florida State League’s Northern Division.

The Threshers do not have much pop in the lineup.  They will only go as a far as its pitching will take them.

All Anderson needs is some kind of breaking ball that he can command and this guy could be a top of the rotation pitcher.  But he is not there yet! 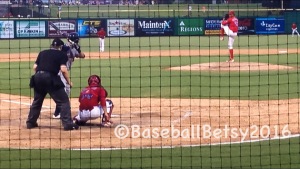 Ranfi Casimiro makes his debut as a reliever

The real story was watching Ranfi Casimiro come on to pitch the final three innings in relief to pick up the win on a Josh Tobias home run into the Tike Bar in left.

You see, Casimiro had made 76 straight starts over the last four seasons in the Phillies system.  Never missing a start until he spent seven days on the DL two weeks ago.

He was thrown right into the fire as a reliever in the top of the seventh trying to hold a 1-0 lead.

After walking the first batter he faced on four pitches and giving up a single to the next batter, he induced a ground ball double play with the runner scoring from third to tie up the game.  And after the first two batter he faced got on base in the seventh he would retire the next eight batters in order in his three innings of work.

Switch hitting second baseman Josh Tobias launched his home run to give the Threshers a 2-1 lead which Casimiro held in the ninth for his first win as a reliever after going 7-7 as a starter this season.  Watch Casimiro’s strikeouts in the 8th and 9th innings HERE and HERE.

Last night we might have seen a top of the rotation starter and a shutdown reliever develop in the Phillies system.  It was a night to remember for us.

I have been a faithful Phillies follower all my life. Today I am most intrigued by those players in the minor league system who work every day of the year to make it to the Show. This is what this blog is mostly all about. To read more, click here: https://baseballross.wordpress.com/2012/02/05/how-i-got-started-in-baseball/
View all posts by Baseball Ross →
This entry was posted in August 2016 and tagged Baseball Betsy, Baseball Ross, clearwater Threshers, Drew Anderson, Philadelphia Phillies, Ranfi Casimiro. Bookmark the permalink.