Posted on September 2, 2016 by Baseball Ross

A recent post on Philly.com by Phillies beat writer Matt Gelb outlined the lack of hitting of the Phillies minor league position players at the higher levels of the farm system. Read HERE.  But it is a different story for the Phillies pitching in the low minors.

The best examples are the pitchers for the rookie level GCL Phillies.   In the 17-team Gulf Coast League Phillies pitching dominate the five categories for pitching leaders.  Read HERE. 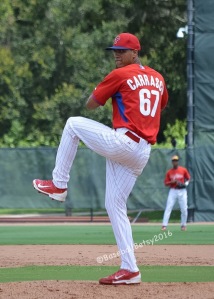 At low A the pitching surprise of the year in the Phillies system has been 21-year-old Alberto Tirado.  In his last ten starts for Lakewood in the South Atlantic League he has gone 7-1 with a 1.97 ERA, striking out 80 in 50.1 innings.  He has an excellent 4-1 strikeout to walk ratio.  He can sit his fastball in the high 90’s and has become the top starting pitching prospect in the system since leaving the bullpen where he struggled with control and command.

The other surprise starter has been 21- year- old lefty, Elniery Garcia, who is just two weeks younger than Tirado.  Garcia has gone 11-4 this season with a 2.77 ERA with Clearwater in the high A Florida State League.

Combined, Triado and Garcia have gone 17-5 this season and would form a nice, right-left,  starting tandem in any starting rotation.

Though the bats at the upper levels of the Phillies farm system may have tailed off late in the season, the young pitching at the lower levels of the system shined as the 2016 season came to an end.

I have been a faithful Phillies follower all my life. Today I am most intrigued by those players in the minor league system who work every day of the year to make it to the Show. This is what this blog is mostly all about. To read more, click here: https://baseballross.wordpress.com/2012/02/05/how-i-got-started-in-baseball/
View all posts by Baseball Ross →
This entry was posted in September 2016 and tagged Alberto Tirado, Baseball Betsy, Baseball Ross, clearwater Threshers, Elniery Garcia, GCL Phillies, Lakewood BlueClaws, Luis Carrasco, Mauricio Llovera, Nick Fanti, Philadelphia Phillies, Sixto Sanchez. Bookmark the permalink.