It was a well played Instructs game with the Blue Jays Saturday morning on Roberts Field at the Carpenter Complex.  Good pitching and a big two-run double with the bases loaded by the Phillies catcher Rodolfo Duran was the difference in the 2-1 win over the Blue Jays.

We saw good pitching from Brandon Leibrandt, Victor Arano Jeff Singer who are headed to the Arizona Fall League next week.  Lefty Nick Fanti came on and pitched two shutout innings watch HERE and HERE for two of his outs. 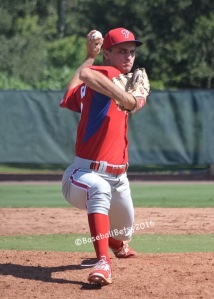 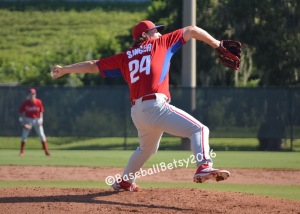 Other Phillies Instruct players headed to the AFL also played including Mitch Walding, Aaron Brown and Scott Kingery.  Walding doubled in the game. Watch HERE.  He also played first base after spending his minor league career at third base.

Headed to winter ball in Columbia, Josh Tobias doubled and scored a run on the Duran double in the game. Watch HERE. Tobias played third base and left field in the game after playing second base in his two year Phillies minor league career.

But the big hit in the game was the bases loaded double by Duran who drove the pitch to right field to score two runs late in the game. Watch HERE.  In his final at bat he lined a hit to left center but was thrown out trying stretch it into a double. Watch HERE.

The 18-year-old Duran is one of the top hitting catchers in the Phillies system.   This season in the Gulf Coast league he hit .315 with three homers in 73 at bats.  With runners in scoring position he hit .333.

Though he is not big for a catcher, listed at 5’9″, 170 lbs.,  Rodolf0 Duran came up very big  at the plate in an interesting Instructs game on Saturday.

I have been a faithful Phillies follower all my life. Today I am most intrigued by those players in the minor league system who work every day of the year to make it to the Show. This is what this blog is mostly all about. To read more, click here: https://baseballross.wordpress.com/2012/02/05/how-i-got-started-in-baseball/
View all posts by Baseball Ross →
This entry was posted in October 2016 and tagged 2016 Phillies Instructs, Baseball Betsy, Baseball Ross, Brandon Leibrandt, Josh Tobias, Mitch Walding, Nick Fanti, Philadelphia Phillies, Rodolfo Duran, Victor Arano. Bookmark the permalink.