Last Monday, I watched one of the best games of the season as the Phillies Instructs downed  the Blue Jays Instructs 8-5. Today’s game at Bright House Field was just the opposite as the Blue Jays won 9-1.

The final week of Instructional baseball got underway this afternoon on a sad note when we learned of an injury to first baseman Luis Encarnacion late last week.  He was just coming into his own with the bat and in field in recent Fall Instruct games. 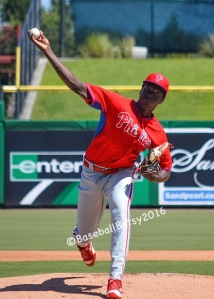 Kilome was outstanding in the South Atlantic League this season and pitched one of his best games of the season in the playoffs. He threw seven innings of one hit, nine strikeout shutout baseball to get the only Lakewood win in the Finals.

In today’s game, Kilome started and pitched two innings of one-hit ball, striking out one and otherwise throwing nothing but ground balls. The only run he gave up was unearned on an infield error in the second inning.  Watch his strikeout HERE.

Center fielder Simon Muzziotti came up with a couple of singles and scored the only Phillies run in the bottom of the ninth.  Watch his ninth inning single HERE. 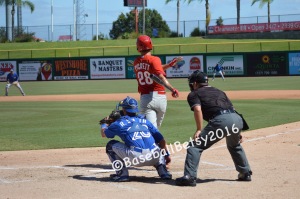 Normally an outfielder, Greg Pickett is learning to play first base. He came up in the bottom of the ninth and doubled in Muzziotti for the only Phillies run.  Watch HERE.

Finally, Baseball Betsy and I are sad to report Phillies Instructs regular first baseman Luis Encarnacion suffered a serious leg injury in a game late last week .  We hear he is scheduled for surgery tomorrow morning.  We hope for a complete recovery.

I have been a faithful Phillies follower all my life. Today I am most intrigued by those players in the minor league system who work every day of the year to make it to the Show. This is what this blog is mostly all about. To read more, click here: https://baseballross.wordpress.com/2012/02/05/how-i-got-started-in-baseball/
View all posts by Baseball Ross →
This entry was posted in October 2016 and tagged 2016 Phillies Instructs, Baseball Betsy, Baseball Ross, Franklyn Kilome, Greg Pickett, Philadelphia Phillies, Simon Muzziotti. Bookmark the permalink.