What more can you ask of a starting pitcher? Pitching a strong game when it really matters.  They are top-of-the-rotaton, opening day prospect starting pitchers at four different minor league levels in 2017. 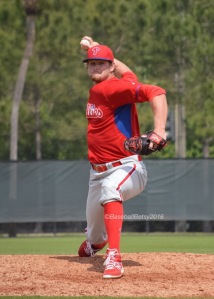 Lively had a four-hit, eight strikeout shutout going with two out in the eight inning before giving up a two-run homer in the first game of the playoffs against the Scranton/Wilkes-Barre RailRiders. SWB would go on to win the game 2-0, the series 3-0 and the AAA National Championship. Watch a Lively strikeout HERE.

Lively finished up the season going 18-6 between Reading, Lehigh Valley and the playoff game for the most wins in minor league baseball.

Elniery Garcia had a season to remember.  He finished strong going 3-0 in his final three games striking out 22 in 20 innings and 13-4 overall.  He won a playoff qualifying elimination game for Clearwater, then a playoff elimination game for Reading in back-to back starts to end the season.  Both of his teams were eliminated in their next games.

In a nine-inning stretch combining his Clearwater and Reading games, Garcia struck out 14. Garcia showed that he thrives in the pressure of the big games.  Watch HERE when Garcia strikes out the side in the second inning of his AA debut for Reading against Trenton in the Eastern League semi-finals. 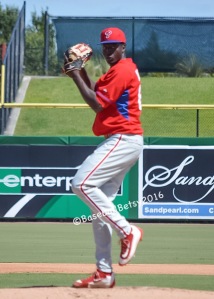 Talk about finishing strong, Franklin Kilome went 4-1 with a 1.98 ERA striking out 73 in 54.2 innings in his final ten starts for Lakewood. In last three starts he pitched 20 shutout inning striking out 24.  In his final start in that stretch he pitched the game of his life, a seven inning, one-hit, nine strikeout, outing to get the win against the Rome Braves.  See his final strikeout here in the game HERE.

The Braves would go on to win the next three games of the best-of-five SAL Finals by outscoring the BlueClaws 14-2.  Rome would be selected by Baseball America as its Minor League Team of Year.

Kilome likes pitching in the post season. He picked up Williamsport’s only post season win in 2015, a five-inning shutout. 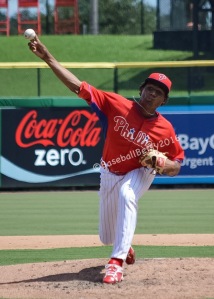 We blogged about Sixto Sanchez winning the first game of the GCL post season in our previous blogs. In that game Sanchez pitched a seven-inning, four-hit shutout.

What makes the 18-year-old different from the other three starters mentioned in this blog is that he is not primarily a strikeout pitcher.  In his playoff win Sixto struck out only four, none after the fourth inning.  But induced 14 ground ball outs and had only one fly ball out in the game.

In his two pr0 seasons, Sanchez has yet to give up a home run in 86.2 innings of work. Watch HERE as induces a ground ball double play.

Though the Front Offices of some major league teams might not put too much emphasis on the minor league post season, the players do.  It is drilled into them to “finish strong” in order to get consideration to move up the next season

Lively and Garcia were rewarded by getting added to the 40-man roster to avoid the Rule Five Draft.  We will look forward to seeing them when pitchers and catchers report on Feb. 14th.

The Phillies are overflowing with starting pitching at all levels. But it is nice to know that they will have an ace starting pitcher at each the AAA, AA, A+ and A ball levels to start the 2017 season, all with the stuff to move up quickly in the Phillies system.

I have been a faithful Phillies follower all my life. Today I am most intrigued by those players in the minor league system who work every day of the year to make it to the Show. This is what this blog is mostly all about. To read more, click here: https://baseballross.wordpress.com/2012/02/05/how-i-got-started-in-baseball/
View all posts by Baseball Ross →
This entry was posted in 2017, February and tagged Baseball Betsy, Baseball Ross, Ben Lively, Elniery Garcia, Franklyn Kilome, Philadelphia Phillies, Phillies Minor League Top-Of-The-Rotation Pitchers, Sixto Sanchez. Bookmark the permalink.