The Phillies Florida State League team should be an interesting team to watch.  The team is basically the 2016 Lakewood BlueClaws.  They made it to the Finals in the Sally League only to go down to the Rome Braves, the best team in the minors last season according to Baseball America.

The Threshers should be in the hunt in the Florida State League.  The only problem is that the Atlanta Braves have moved their high A team into the FSL.  They are called the Florida Fire Frogs and will play out of  Osceola County Stadium in Kissimmee.

The Threshers host the Fire Frogs the weekend of April 21-23.  It should be some of the best minor league baseball this season.

In the meantime, the future Threshers looked sharp yesterday on Ashburn Field as the dispatch the Blue Jays prospective High A team, 9-4.

Lakewood lacked offense in the Sally Finals. After winning the opener of the best of five, 4-0, behind a one-hit combined shutout by Franklyn Kilome and Grant Dyer,  the Rome Braves outscored them 14-2 to sweep the final three games.

The future Threshers were led by third baseman Jan Hernandez who hit a two-run homer and a RBI sacrifice fly.  Watch HERE.   Yesterday’s lineup was similar for the most part to 2016 Lakewood’s playoff  roster. Deivi Grullon catching, Wilson Garcia, 1B, Grenny Cumana, 2b, Hernandez, 3B, Emmanuel Marrero, SS, Cornelius Randolph, LF, Jose Pujols, RF and Damek Tomscha, DH.  Zach Coppola was in center but I would not be surprised to see Jiandido Tromp in the outfield as well.

If Hernandez can have a breakout season, the offensive needs may be solved.  He hit .255 with 10 homers and 31 RBIs last season but struck out 100 times in 310 at bats.

Clearwater’s pitching should be strong with the Lakewood 2016 rotation taking over for the most part lead by Franklyn Kilome, Alberto Tirado, Seranthony Dominguez, Jose Taveras, and Luke Leftwich who ended the season with the Threshers.   Harold Arauz who made 19 starts last season for Lakewood and Blake Quinn are also in the hunt. 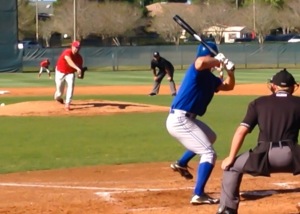 The sixth starter might be Quinn who was used in relief last season.  Quinn looked strong yesterday for two innings before giving up three runs in the third inning and another run in the fourth.  He looked strong getting three called strikeouts on the corner but was hit hard when he came down the middle of the plate. Watch several of his strikeouts HERE.

In the bullpen it looks like Grant Dyer will be back as a closer.  Yesterday, righthanders Jacob Waguespack pitched the 5th and 6th innings and Will Hibbs came on in the ninth. From the leftside Tyler Gilbert and Jeff Singer pitched a clean inning each in the 7th and 8th.

Gilbert, who made 23 starts for Lakewood last season, looked particularly sharp in yesterday’s game in his one inning of work.  Watch his strikeout HERE.

Clearwater normally plays Lakewood in an exhibition game the Tuesday night before the season opens next Thursday evening at Spectrum Field when the Threshers open the 2017 season at Spectrum Field against the Dunedin Blue Jays.

I have been a faithful Phillies follower all my life. Today I am most intrigued by those players in the minor league system who work every day of the year to make it to the Show. This is what this blog is mostly all about. To read more, click here: https://baseballross.wordpress.com/2012/02/05/how-i-got-started-in-baseball/
View all posts by Baseball Ross →
This entry was posted in 2017, March and tagged Blake Quinn, clearwater Threshers, Jan Hernandez, Phillies, Spring Training, Tyler Gilbert. Bookmark the permalink.