It’s All Star time again for the A ball guys.  The Florida State League faces off on Saturday at newly renovated Joker Marchant Stadium in Lakeland while the South Atlantic League game takes place on Tuesday in Columbia, South Carolina.

The Phillies will be well represented at both games but are all of their best prospects will  not likely be represented.   In my opinion  several of the most likely players to play in the major leagues someday were not selected. They were first baseman Darick Hall and starting pitcher Adonis Medina for the Lakewood BlueClaws and converted starter Jacob Waguespack for Clearwater.  Right now they might be the best of the bunch but not yet All-Star worthy according to the minor league experts.

Hall is having a season to remember for Lakewood.  Currently he is leading the Sally league in RBIs. The big first baseman has driven in 46 runs in 48 games. His ten home runs are good enough for third place in the league.  He has driven in 15 runs and hit four homers in his last 11 games.  Because of an ankle injury he missed 19 games in April.  Watch Hall’s most recent home run HERE after the Luke Williams interview. 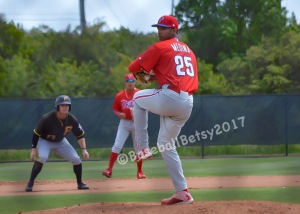 Adonis Medina may have only a 2-5 record in 11 starts but leads the BlueClaws staff in strikeouts and is sixth in the league overall strikeouts.  He has struck out 75 in 60.1 innings.  In his most recent start he struck out 12 in seven innings on a three-hit shutout. Read HERE. and Watch HERE. 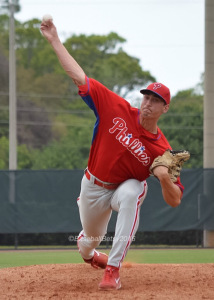 Since becoming a starter four starts ago, Jacob Wauguepack has been a revelation for the Threshers. In those starts, he has gone 2-0 with a 0.95 ERA allowing only two runs and 11 hits while striking out 17, walking only three in 19 innings.  Watch HERE, Waugenpack’s four strikeouts in his five inning shutout on Wednesday.

You can read more about the minor league All-Star games and player selections HERE but you will only read about Phillies prospects Hall, Medina and Waugenpack in the above post!

I have been a faithful Phillies follower all my life. Today I am most intrigued by those players in the minor league system who work every day of the year to make it to the Show. This is what this blog is mostly all about. To read more, click here: https://baseballross.wordpress.com/2012/02/05/how-i-got-started-in-baseball/
View all posts by Baseball Ross →
This entry was posted in 2017, June and tagged 2017 minor league all-star games, Adonis Medina, Baseball Betsy, Baseball Ross, clearwater Threshers, Darick Hall, Jacob Waguespack, Lakewood BlueClaws, Philadelphia Phillies. Bookmark the permalink.