Clearwater Threshers Just Missed Out On First Place But Ranfi Casimiro, Herlis Rodriguez and Drew Stankiewicz Are Moving On Up!

The Threshers fought right down to the end but came up a game short of winning the first half of the Florida State League’s Northern Division..

Going into the final three game series, the Threshers were tied with the red-hot Tampa Yankees.  The Yanks swept the team with the worst record in the Florida State League, the Florida Fire Frogs, while the Threshers won two of three against the Bradenton Marauders, one of the top teams in the Southern Division.

Though the Phillies minor league department seems to down play minor league playoffs,  I do not. Nothing beats playing with a little pressure in must win situations.  These guys below came up big in the final first half, three game, must win series for the Threshers:

Centerfielder Mark Laird broke out of a slump to go 7 for 15.

Shortstop Emmanuel Marrero hit 5 for 12 and made several great plays in the field.

Cole Irvin pitched a brilliant seven innings outing allowing five hits, a run and striking out six to get the win last night.

Ranfi Casimiro pitched his strongest game in his career as a reliever by pitching three shutout innings in the first game of the series striking out six for a hold.

Jeff Singer was old reliable out of the pen picking up saves in both of the wins pitching 2.1 shutout inning striking out three.  He struck out the final batter last night, according to Bradenton’s  MiLB-TV coverage, on a 96 mph fastball for strike two and a slider for the swinging strikeout and his 14th save of the season. 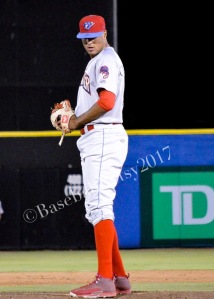 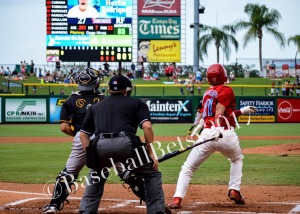 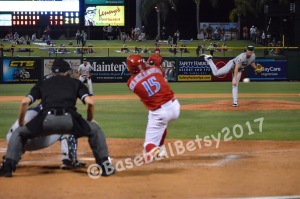 It’s good to learn that Herlis Rodriguez, Ranfi Casimiro and Drew Stankiewicz have just been called up to Reading.  They did it the old fashion way.  They earned it!

I have been a faithful Phillies follower all my life. Today I am most intrigued by those players in the minor league system who work every day of the year to make it to the Show. This is what this blog is mostly all about. To read more, click here: https://baseballross.wordpress.com/2012/02/05/how-i-got-started-in-baseball/
View all posts by Baseball Ross →
This entry was posted in 2017, June and tagged clearwater Threshers, Cole Irvin, Emmanuel Marrero, Helris Rodriguez, Jeff Singer, Mark Laird, Philadelphia Phillies, Ranfi Casimiro, Reading Fightin Phils, Wilson Garcia. Bookmark the permalink.