The GCL Phillies have open the season to a 2-2 record losing two games and winning one  game on Tuesday by a run and winning big on Wednesday by a 18-7 score. 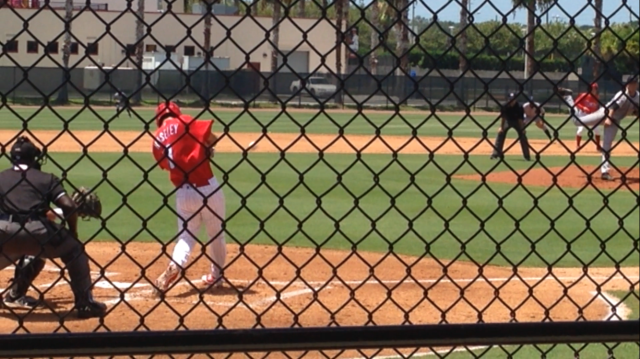 Adam Haseley barrels a triple down the right field line at Ashburn Field against the GCL Tigers.

The rookie position players who have stood out include outfielders, first round draft pick Adam Haseley and Simon Muzziotti who was signed by the Phillies after his international signing rights were revoked from the Boston Red Sox by MLB in 2016. Read HERE.

Second baseman Brayan Gonzalez has played a strong second base and has hit 5 for 11 with a homer. Watch a base hit from Wednesday’s game HERE.

In three games Haseley has gone 7 for 12 with a triple and double, 4 RBIs, 2 walks and three strike outs.  Watch two of his hits from Wednesday’s game against the Tigers, HERE.

Rehabbing Zach Green hit three homers and a sacrifice fly RBI in four of his ten plate appearances to drive in six runs in two games. Watch his third home run, HERE.  He has played a game at third and a game at first so far.

On the mound the Phillies starting pitching has struggled.  The starters in the first three games gave up 14 earned runs in 12.2 innings.  Rehabbing Zach Eflin started in today’s game and pitched three shutout innings against the Tigers in Lakeland.  He took a start away from highly regarded Francisco Morales.  After Eflin left, Morales gave up a three-run homer in his first inning of relief but otherwise pitched well striking out four with no walks in a five inning relief stint.

The GCL Phillies wrap up the first week of the GCL season with a game at the Carpenter Complex Friday at noon and travel across the Bay to battle the Yankees East team at their Complex in Tampa on Saturday morning at 10:00 A.M.

I have been a faithful Phillies follower all my life. Today I am most intrigued by those players in the minor league system who work every day of the year to make it to the Show. This is what this blog is mostly all about. To read more, click here: https://baseballross.wordpress.com/2012/02/05/how-i-got-started-in-baseball/
View all posts by Baseball Ross →
This entry was posted in 2017, June and tagged Adam Haseley, Brayan Gonzalez, Denny Martinez, GCL Phillies, Oscar Marcelino, Simon Muzziotti, Zach Eflin, Zach Green. Bookmark the permalink.