Posted on September 6, 2017 by Baseball Ross

Four GCL Phillies players, most of any team in the league, have been selected to the 2017 GCL All Star team.  They include pitcher Manuel Silva, reliever Anton Kuznetsov, corner outfielder Ben Pelletier and first baseman/DH Quincy Nieporte. Read HERE 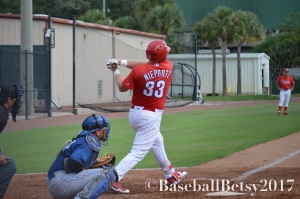 One of out highlights of the Clearwater baseball season is watching the Gulf Coast League  GCL Phillies.  This season ended abruptly for them Sunday afternoon as the GCL Yankees East downed the GCL Phillies 4-0 in the knockout, semi-final game of the playoffs. 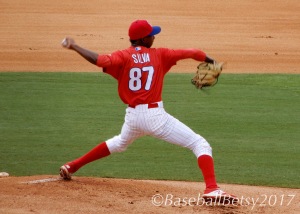 We still got to seen Phillies, Dominican, lefty, starter Silva pitch a good game. He went five innings allowing two earned runs while striking out five to take the loss. Watch three of his strike “threes” HERE. He went 6-0 with a 2.60 ERA in the regular season.

Nieporte, out of Florida State, had one of the four Phillies hits in the game.  He hit five homers in 41 games to lead the team in the regular season. His 35 RBIs were the fourth highest in the league.  Watch a RBI base hit from the previous week by Nieporte, see HERE.

The offense was lacking as the Phillies could only muster four hits in the semi-final game.  They were missing corner outfielder Pelletier out with a lower body injury.  He was a key bat in the lineup all season. 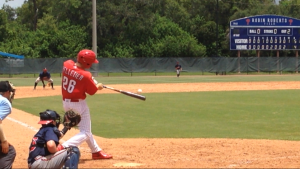 A 19 year-0ld Canadian from the Montreal area, Pelletier ended the regular season third in the league in batting average hitting .333 and finished his last ten games hitting .368.  Watch Pelletier hit a tape measure home run at Ashburn Field earlier in the season.  HERE.

Selected as the top relief pitcher in the GCL, Kusnetsov was outstanding all season long going 2-1 with five saves allowing only one earned run in 15 games over 25.1 innings. Read an MLB article about the Russian from Moscow, HERE.  Watch him pitch against the GCL Braves earlier in the season HERE.

Below is a picture of the 19 year-old Kusnetsov with his GCL fans John Berry and his wife Anna who is a native of Russia. 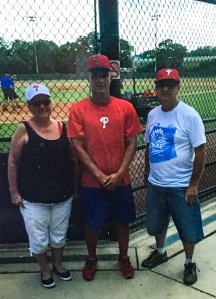 I have been a faithful Phillies follower all my life. Today I am most intrigued by those players in the minor league system who work every day of the year to make it to the Show. This is what this blog is mostly all about. To read more, click here: https://baseballross.wordpress.com/2012/02/05/how-i-got-started-in-baseball/
View all posts by Baseball Ross →
This entry was posted in 2017, September, Uncategorized and tagged Anton Kuznetsov, Baseball Betsy, Baseball Ross, Ben Pelletier, GCL 2017 semi-final playoff game, GCL Phillies, Manuel Silva, Philadelphia Phillies, Quincy Nieporte. Bookmark the permalink.