It Was Sixto Sanchez vs Josh Donaldson Last Night In Dunedin And Sixto Won But Not By Much!

It was a fascinating game Saturday night at the old Dunedin Stadium. It was a match between young 19-year-old Sixto Sanchez on the mound for the Clearwater Threshers battling major league star Josh Donaldson in three at bats.  The “Bringer of Rain” was on a rehab assignment from Toronto for Dunedin Blue Jays. 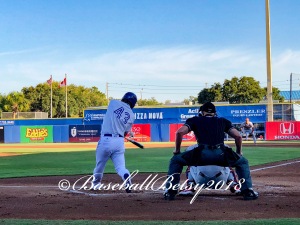 Donaldson backed the Threshers left fielder Adam Haseley to the wall for a catch in the first inning.  Watch HERE. 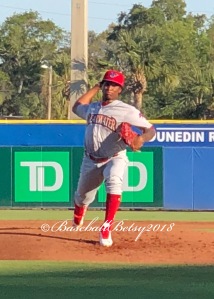 In the third inning, Sixto got Donaldson to ground out to second on a 100 mph fastball. Watch HERE.

Finally in the sixth inning, Sixto took things into his own hands and got the power hitting Toronto third baseman to pop up on an 81 mph off speed pitch.  Sanchez took charge and made the catch himself near the mound with a big sigh of relief. Watch HERE.

Donaldson was done after six innings and Sixto Sanchez could breathe easier.  He bested one the top power hitters in baseball in his three at bats.

It’s not like Sanchez had much breathing room in the game.  He was helped by a long home run by Austin Listi as he clanked one off the top of the scoreboard in left in the top of the sixth inning to give the Threshers a 2-0 lead.  Watch HERE.

Sixto would go on to pitch seven innings for the first time in his career. He threw 83 pitches, 54 for strikes allowing only four hits, one walk and two strikeouts.  He did allow a run in the his final inning. Dunedin put together the run on two singles and a sacrifice fly.

Threshers closer Jeff Singer came on and pitched the final two innings to register his second save of the season. But it took a great play by shortstop Arquimedes Gamboa to get a force out at second for the second out in the bottom of the ninth to help preserve the 2-1 win.  Watch HERE.

Sanchez picked up his first win of the season. But it was his dueling in the three at bats with major leaguer Josh Donaldson that stood out and showed the moxie Sixto has. It is why he is the Phillies No. 1 prospect according to MLB Pipeline.

I have been a faithful Phillies follower all my life. Today I am most intrigued by those players in the minor league system who work every day of the year to make it to the Show. This is what this blog is mostly all about. To read more, click here: https://baseballross.wordpress.com/2012/02/05/how-i-got-started-in-baseball/
View all posts by Baseball Ross →
This entry was posted in 2018, April and tagged Adam Haseley, Arquimedes Gamboa, Austin Listi, clearwater Threshers, Dunedin Blue Jays, Jeff Singer, Josh Donaldson, Philadelphia Phillies, Sixto Sanchez, Toronto Blue Jays. Bookmark the permalink.