Winning teams get help from from the entire roster. In last night’s 5-2 win the Threshers   to sweep the three game series with Daytona to extend their winning streak to four games. The way they did it proved the winning formula works.

Starting pitcher Mauricio Llovera finally won after losing his last seven decisions in a row. Slumping first baseman Kyle Martin and designated hitter Grenny Cumana, who has lost playing time recently despite hitting over ,350, were in the middle of the Threshers run production most of the night.

Martin came into the game hitting .157 and has had a dreadful season.  He was send down from Reading after hitting only .191 to start the AA season. It did not get any better for him in Clearwater where he was hitting only .157 at game time.

He broke out of his slump going 2 for 3 with a double in the fourth inning and a two-run RBI, bases loaded single in the fifth inning. His key run scored and hits turned out to be the difference in the game. Watch Martin’s two-run, RBI single HERE. 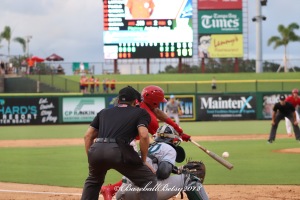 Cumana came into the game hitting .352 after joining the Threshers on June 11th from extended spring training. Still, he has been the odd man out in recent games. He started in last night’s game as the DH. He went 3 for 4 with a RBI single in the fifth inning to raise his average to .370.  Watch Cumana’s RBI single HERE.

Llovera had lost seven games in row and not won since starting the season 2-0 with a win way back on April 21st.  He finally put together a strong outing going six innings giving up only four hits, no walks and striking out five to get the win.

His only blemish was giving up a home run in his last inning of work.  Watch Llovera strikeout Taylor Trammell, the MVP in the recent MLB Futures Game, to start last night’s game, HERE.

Again the Threshers bullpen held off the Tortugas for the most part the rest of the way.   Lefty Jakob Hernandez did give up a home run to Trammell in the eight inning to make the final score 5-2.  He continued his remarkable season-long run of strikeouts by fanning three more over the final two innings.

Jakob has now struck out 68 in only 51.2 innings of relief work this season. He has one of the highest strikeout to innings pitched ratios of any pitcher in baseball.  Watch Hernandez’s final strikeout to end the game, HERE.

I have been a faithful Phillies follower all my life. Today I am most intrigued by those players in the minor league system who work every day of the year to make it to the Show. This is what this blog is mostly all about. To read more, click here: https://baseballross.wordpress.com/2012/02/05/how-i-got-started-in-baseball/
View all posts by Baseball Ross →
This entry was posted in 2018, July and tagged Baseball Betsy, clearwater Threshers, Grenny Cumana, Jakob Hernandez, Kyle Martin, Mauricio Llovera, Philadelphia Phillies. Bookmark the permalink.