The Clearwater Threshers downed the Tampa Tarpons 4-2 with strikeout pitching and timely doubles to remain one game behind the Dunedin Blue Jays in the battle for the second half northern division lead in the Florida State League. 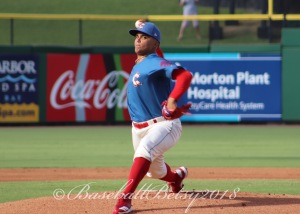 Maurico Llovera pitched his best game of the season taking a no-hitter into the seventh inning with two outs before giving up a hit. He was charged with two runs in the inning. His fastball was sitting at 95-96 mph until the 7th inning and he had his best breaking pitches of the season to strikeout a career high ten batters in a game. It was a 106-pitch gem. Watch four of his ten strikeouts HERE. 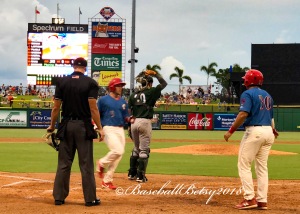 The Threshers offense relied on six doubles and the dynamic play of Kevin Markham to put across four runs in the game. Markham drove across two of  runs on a fielder’s choice in the second inning and a sacrifice fly in the eight inning.  He also singled, watch HERE, stole a base and then came around to score with a drawn-in infield on a base hit by Jose Gomez for the second Threshers run in fourth inning.

The second double of the game by Jose Pujols drove in Mickey Moniak who had doubled in the fifth inning.  It was Pujols’ 16th RBI in his last nine games. He has hit .424 (14 for 33 with five home runs) over that span. Watch HERE.  He now leads the Florida State League of qualified batters in Total Bases and OPS and is second in batting average at .301

It was how Mickey Moniak hit his three doubles in the game that was interesting.  He hit one down each base line and hit another one over the center fielder’s head to use all three fields.  The “Mick” is now hitting .342 in his last ten games. Watch his three doubles HERE.

Addison Russ came on in the ninth to garner his six save in six opportunities to get Llovera his fourth the win of the season. Watch HERE.

I have been a faithful Phillies follower all my life. Today I am most intrigued by those players in the minor league system who work every day of the year to make it to the Show. This is what this blog is mostly all about. To read more, click here: https://baseballross.wordpress.com/2012/02/05/how-i-got-started-in-baseball/
View all posts by Baseball Ross →
This entry was posted in 2018, August and tagged Addison Russ, Baseball Betsy, clearwater Threshers, Jose Gomez, Jose Pujols, Kevin Markham, Mauricio Llovera, Mickey Moniak, Philadelphia Phillies. Bookmark the permalink.