The Phillies Instructs were in camp on Saturday morning. It gave us a chance to see many kids who likely will never make it, others just trying to hang on for next season and top young prospects. We watched several of the Phillies prospects headed to the Arizona Fall League.

Four prospects jumped out to us early on in the scrimmage on Roberts Field at the Complex.  They were: shortstop Luis Garcia, first baseman Darick Hall, corner outfielders Ben Pelletier and Carlos del la Cruz.

Garcia was a top international signing in the 2017 season. He signed with the Phillies for $2.5 million. Read HERE. The switch-hitting shortstop reminds me of  Jimmy Rollins.  All he  did was lead the Gulf Coast League in hitting with a .369 average and was third in the league in RBIs with 32,  hitting .358 with runners in scoring position.

Darick Hall is headed for the Arizona Fall League.  He arrived at the Complex and looks ready to go.  Darick had a big season hitting with runners in scoring position (RISP). He hit .304 with Reading after hitting .362 with Clearwater with RISP. Overall, he hit 26 homers and 87 RBIs in 128 games in 2018. 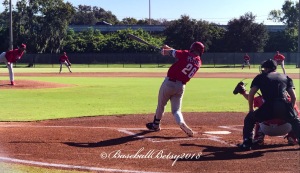 Ben Pelletier was third in home runs and second in RBIs in the half season NY-Penn League in 2018.  He is probably the best young outfielder to come out of Canada recently.  He played the corner outfield positions for Williamsport.

Carlos Del La Cruz played the corner outfield for the GCL Phillies East and was fourth in the league in home runs. He turns only 19 years-old on October 6th. He made a nice throw in Saturday’s game to nail a runner at third.  Watch HERE.

Fall Instructs games go on until Oct. 12th before the 2018 baseball season finally comes to an end in Clearwater.

I have been a faithful Phillies follower all my life. Today I am most intrigued by those players in the minor league system who work every day of the year to make it to the Show. This is what this blog is mostly all about. To read more, click here: https://baseballross.wordpress.com/2012/02/05/how-i-got-started-in-baseball/
View all posts by Baseball Ross →
This entry was posted in 2018, Fall Instructional League, September and tagged Baseball Betsy, Ben Pelletier, Carlos De La Cruz, Darick Hall, Fall Instructional League, Luis Garcia, Philadelphia Phillies. Bookmark the permalink.