The Phillies Front Office has just completed housekeeping duties before the Rule 5 draft. Pitchers Adonis Medina and Edgar Garcia and shortstop Arquimedes Gamboa were added to the 40-man roster. These moves will protect them from the Rule 5 draft coming up as the last order of business of the Winter Meetings, December 13th. 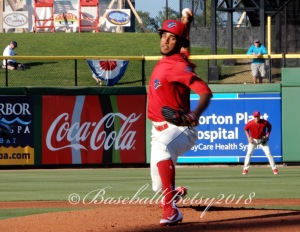 Medina will play at baseball age 22 next season. He went 10-4 for Clearwater in 2018 and ended the season strong with a 2.57 ERA, striking out 30 in 28 innings in August. He struck out 12 with no walls over seven innings allowing only a run and four hits in a game during the month. His fastball was sitting in the mid-90’s with his off speed pitches in the low 80’s. Watch HERE.

Edgar Garcia with Clearwater in 2017

Garcia will play at baseball age 22 in 2019. He has the potential to be a Brad Lidge-type reliever with his hard slider pitched at Reading and ended the season with Lehigh Valley last season. Watch his slider move when he pitched with the Clearwater Threshers in 2017. HERE.

Gamboa is only 21-years-old.  He was the surprise of the three added to the 40-man roster. We watched him play about 70 games for Clearwater last season. He started out hitting .253 in April but ended up hitting just .200 in August, .167 in the FSL playoffs and .186 in the Arizona Fall League. Watch one of his triples HERE. 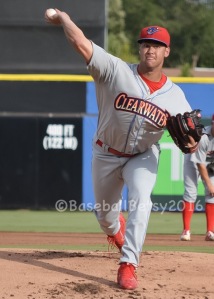 Luke Leftwich with Clearwater in 2017

Tyler Viza with Clearwater in 2016 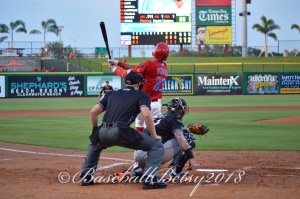 Viza will pitch at baseball age 24 next season. He finished up the 2018 season strong pitching to a 1.98 ERA in his final 10 game including an August 27th start for Reading where he pitched a seven inning, three hit shutout with 11 strikeouts.  He ended the Arizona Fall League with a five-inning shutout where he struck out 9. Read HERE.

Luke Leftwich also finished strong in relief for Reading pitching to a 1.96 ERA and striking 23 in 18.1 innings in his last ten relief appearances. In the Arizona Fall League in eight games, he pitched 10.1 shutout innings striking 12.

Jose Pujols had a breakout year in his second season with Clearwater and ended the season in August with Reading. He will play at baseball age 23 next season. He hit .301 to qualify for the second highest batting average and OPS in the Florida State League. Overall, he finished up slashing at .295/.365/503 with 22 home runs combined. He was tied for the FSL lead in outfield assists with 11.

It should be interesting to see what happens in the Rule 5 draft at the MLB Winter Meetings December, 9-13 in Las Vegas, Nevada.

I have been a faithful Phillies follower all my life. Today I am most intrigued by those players in the minor league system who work every day of the year to make it to the Show. This is what this blog is mostly all about. To read more, click here: https://baseballross.wordpress.com/2012/02/05/how-i-got-started-in-baseball/
View all posts by Baseball Ross →
This entry was posted in 2018, November and tagged 2018 Rule 5 Draft, Adonis Medina, Arquimedes Gamboa, Baseball Betsy, Edgar Garcia, Jose Pujols, Luke Leftwich, Philadelphia Phillies, Phillies 40-man roster, Tyler Viza. Bookmark the permalink.