Nothing’s wrong with a .357 batting average with runners in scoring position. That’s what a top 18-year-old Phillies prospect, Curtis Mead, is hitting with RISP in the Australian Baseball League. 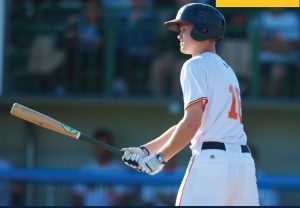 In Saturday’s game, Mead’s base hit drove in the second run in a 4-1 win for the Adelaide Bite, watch HERE. It was a big win for the Bite who are battling for a wild card spot in the ABL post season.

Mead has gone 10 for 28 with RISP with a grand slam and 14 RBIs so far as the ABL season winds down. Just about all of his big numbers have been put up in his last ten games where he is hitting .375. In those last ten games he has struck out only 3 times in 40 at bats.

Another Phillies prospect in Saturday’s game was Adelaide’s 18-year-old catcher, Bruce Wang. He made his first start behind the plate in the ABL.  He is a highly regarded receiver signed out of  mainland China’s MLB Academy back on August 27th. Read HERE.  He went 1 for 3 with a run scored and a walk.  If you want to watch Wang’s catching skills, watch the game HERE.

Mead and Wang are the next generation of Phillies playing “down under” showing what they can do right now!

I have been a faithful Phillies follower all my life. Today I am most intrigued by those players in the minor league system who work every day of the year to make it to the Show. This is what this blog is mostly all about. To read more, click here: https://baseballross.wordpress.com/2012/02/05/how-i-got-started-in-baseball/
View all posts by Baseball Ross →
This entry was posted in 2019, January, Uncategorized and tagged Adelaide Bite, Australian Baseball League, Bruce Wang, Curtis Mead, Philadelphia Phillies. Bookmark the permalink.