For the second straight game, the Clearwater Threshers and the Dunedin Blue Jays combined for 30 strikeouts in each game, a total of 60 in the last 2. The only difference was the Threshers won the game last night 8-3 to pick up their first win after two defeats to the Jays to start the season at Spectrum Field. 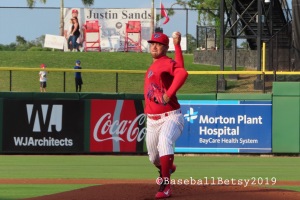 Alejandro Requena looked sharp in the start for the Threshers striking out eight in five innings for the win. Watch HERE. He was acquired from the Colorado Rockies back in 2017 along with infielder Jose Gomez and reliever JD Hammer for Pat Neshek. Neshek has since been reacquire by the Phillies and all of them were in a Phillies system lineup in the first week of this season. 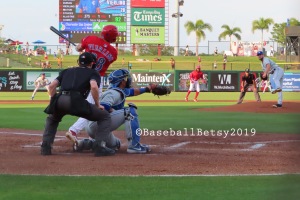 The key hits were a two-run double by Matt Vierling, watch HERE and a bases empty homer by rehabbing Roman Quinn, watch HERE. Vierling has been the power bat to start the season going 5 for 12 with a homer and three RBIs. 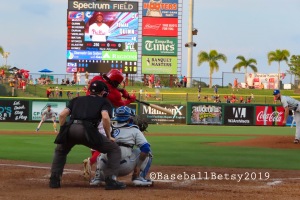 The four game series concludes today with a game at Jack Russell, the former spring training home of the Phillies and Florida State League, Clearwater Phillies. This will be the first FSL game played there since the days of Ryan Howard and Carlos Ruiz back in 2003.

I have been a faithful Phillies follower all my life. Today I am most intrigued by those players in the minor league system who work every day of the year to make it to the Show. This is what this blog is mostly all about. To read more, click here: https://baseballross.wordpress.com/2012/02/05/how-i-got-started-in-baseball/
View all posts by Baseball Ross →
This entry was posted in 2019, April and tagged 2014 Baseball America Top 10 Phillies Propsects, 2017 spring training in Clearwater, Alejandro Requena, Dunedin Blue Jays, Matt Vierling, Roman Quinn. Bookmark the permalink.