Going into the top of the seventh last night it looked like a sure fire win for Lakewood. The BlueClaws have adopted a “piggyback” pitching philosophy where two starters split up nine innings in some games. Starter Ethan Lindow had just finished up a strong five innings leaving with a 5-1 lead over Hagerstown.

Then, the Lakewood opening night starter, Colton Eastman, came on for the final four innings to get his first save as a professional. In the meantime, the roof almost fell in on the BlueClaws as it did on the big league team last night in Philadelphia. In the top of the seventh inning to open the inning, Eastman gave up a single and two doubles. All of the sudden, the score was 5-3 with the tying run at the plate. 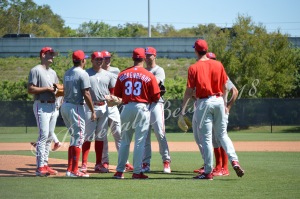 Out of the dugout came pitching coach Matt Hockenberry, a former Phillies farmhand now in his second year as a low minors Phillies pitching coach.  He could have told Eastman, among other things, to throw more of his big 12 to 5 curve balls.

As they would say, the rest is history. Eastman went on and struck out the side on his next nine pitches to stop the bleeding and went on to get a four inning save to seal a 6-3 Lakewood win.

It’s not very often if ever, after a pitching coach goes to the mound, we see such a dramatic turn-a-round as we saw last night on MiLB-TV. After the pitching coach leaves, the pitcher goes on and throws an “immaculate inning” from there, striking out the side on his next nine pitches and goes on to pitch two shutout innings in the 8th and 9th innings for the save.

We have been following Hock ever since he was first signed by the Phillies in 2014 as a ninth round draft pick out of Temple when they had a baseball team there. We were in the stands when he had his best season for the Clearwater Threshers in 2016 when he pitched in relief to a 1.39 ERA in 41 relief appearances. Though, I doubt Matt has ever had anything so dramatic happened in his pro career, as what took place last night after he left mound after coaching up Colton Eastman.

I have been a faithful Phillies follower all my life. Today I am most intrigued by those players in the minor league system who work every day of the year to make it to the Show. This is what this blog is mostly all about. To read more, click here: https://baseballross.wordpress.com/2012/02/05/how-i-got-started-in-baseball/
View all posts by Baseball Ross →
This entry was posted in 2019, April and tagged Baseball Betsy, Colton Eastman, Ethan Lindow, Lakewood BlueClaws, Matt Hockenberry, Philadelphia Phillies. Bookmark the permalink.