Most experts agree that the Phillies are strong in prospect pitching depth but lack hitters.  That might be the case but two hitters have stood out when we have watch them in person or on MiLB-TV, Lakewood’s Alec Bohm and Clearwater’s Nick Maton.

The Phillies minor league teams batting averages are not as bad as they may seem. Only Reading’s .218 team batting average is in the bottom half of its league of the four full season Phillies teams. Perhaps when the weather warms up, so will the Fightin Phils bats. 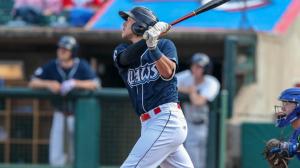 We have been impressed with Bohm since we saw him in a Fall Instructs game hit one up on the Tiki Bar roof at Spectrum Field. In minor league spring training, he had the skill of hitting sacrifice fly RBIs. After a slow start, he has come into his own in the South Atlantic League. He started out going 1 for 13 in his first four games but since then he has hit .424 (28 for 66) including 10 multi-hit games.

In Saturday’s action, he hit a two-run homer for his third long ball in April to lead the BlueClaws to a 4-1 win over Hickory. The only problem is he has no position to play. In the last four games he has played third base and first base and been a designated hitter.

Clearwater’s Nick Maton also has been moved around between different positions at second, short and third base to start the season. He is doing something different though with the bat. After a two-run single in the Threshers 6-3 win over the Tampa Tarpons last night, he is now hitting .545 (10 for 17) with runner in scoring position. With the bases empty, he is hitting only .136 and 1 for 8 with a runner on first base only. 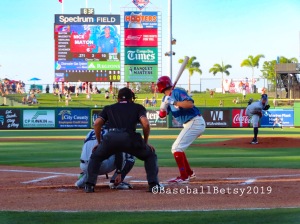 As the first month of the season comes to an end, it will be interesting to see if Bohm gets moved up and settles on a position and if Maton can start to hit with the bases empty or with a runner not in scoring position.

I have been a faithful Phillies follower all my life. Today I am most intrigued by those players in the minor league system who work every day of the year to make it to the Show. This is what this blog is mostly all about. To read more, click here: https://baseballross.wordpress.com/2012/02/05/how-i-got-started-in-baseball/
View all posts by Baseball Ross →
This entry was posted in 2019, April and tagged Alec Bohm, Baseball Betsy, clearwater Threshers, Lakewood BlueClaws, Nick Maton, Philadelphia Phillies. Bookmark the permalink.