As a fan you could not ask for more. The starting pitchers for each team had ERA’s under 1.00 and the game ended with both starters still under 1.00  You knew the team that scored the first run would win. That’s the way it ended with Bradenton winning 1-0 with the tying run on third and the winning run stranded on second for Clearwater.

Bradenton put a run on the board in the sixth inning and made it stand up.  The Marauder’s starter Cody Bolton had given up only three earned runs in his five previous starts. With the often  weak Threshers offense, we sorta knew that might be all the Marauders needed for the win.

With lefty Damon Jones on the mound, who has been the Threshers best pitcher this season, the Threshers stood a chance, but not much. Jones tired a bit in the sixth to give up the run but he was outstanding. He struck out seven in his six innings and for the first time in his six starts walk none. He used his fastball to set up his off-speed pitches.  He needed only 68 pitches after walking 17 in his previous five starts and leaving those games early because of it. 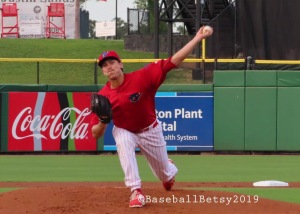 Jones pitched his best game of the season. He has now an 0-3 record.  His 0.92 ERA is still only fourth in the low scoring Florida State League. He still leads the FSL in strikeouts with 43 in 29.1 innings. However, not walking a batter in last night’s game puts Jones on a higher level. Watch his strikeouts from last night, HERE.

The Threshers could not score but in the bottom of the ninth it looked like they could win the game. Sizzling-hot Simon Muzziotti led off the bottom of the ninth with a base hit to center. For some reason, Manager Marty had the Phillies 2018 first round pick, Alec Bohm batting second and playing first base in the lineup. Initially, it looked like sheer genius. Bohm drilled a pitch on a frozen rope to right center for a base hit moving Muzziotti to third with no outs. Watch Bohm’s base hit HERE.

Alec Bohm at first base 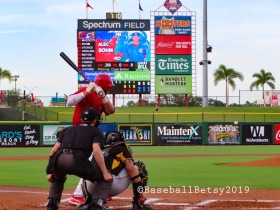 There they would stay with only Bohm moving to second on a wild pitch that Muzziotti chose not to attempt to score, likely warned by the ever-cautious Marty coaching at third to stay put. The next three batters in the three, four and five holes in the lineup, popped up, struck out and grounded out to end the game.

Sure would have been nice to have Bohm batting in the middle of the lineup with Muzziotti sacrificed into scoring position with Alec at bat but it was not to be. After all this is just A ball where too many times lineup construction varies game by game!

The Threshers have won only 12 of their first 30 games under Manager Marty.  After last night’s loss they have settled firmly into fifth place in the six-team Northern Division of the FSL.

I have been a faithful Phillies follower all my life. Today I am most intrigued by those players in the minor league system who work every day of the year to make it to the Show. This is what this blog is mostly all about. To read more, click here: https://baseballross.wordpress.com/2012/02/05/how-i-got-started-in-baseball/
View all posts by Baseball Ross →
This entry was posted in 2019, May and tagged Alec Bohm, Baseball Betsy, clearwater Threshers, Damon Jones, Philadelphia Phillies, Simon Muzziotti. Bookmark the permalink.