Should Damon Jones Get a Chance to Be The Phillies Fifth Starter?

It’s always “darkest before the dawn”. It could not have been any darker than it was on Sunday for the Phillies pitching.  They gave up 15 runs, all earned, in a humbling 15-1 loss to the Atlanta Braves in the battle for first place in the N.L. East. The best Phillies pitcher was a position player Sean Rodriguez. He pitched a clean eight inning in the game. 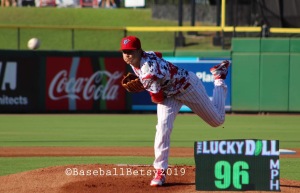 Damon Jones pitching earlier in the season for Clearwater

At the same time on Sunday, Damon Jones was making his AA debut for the Reading Fightin Phils against the Harrisburg Senators in the Eastern League. He was the bright spot in the Phillies organization by all but shutting down the Senators for six-innings in Reading’s fight for first place in the first half of the Eastern Division.

Jones allowed only a run, a hit, a walk and struck out 12 over his six innings of work.  He  faced only two batters over the minimum leaving the game tied at 1-1. Reading would go on and win 2-1.  Read HERE.

The Phillies will need a fifth starting pitcher in the major league rotation for Friday night’s game against the Miami Marlins at Citizens Bank Park. The one pitcher who seems ready to fill the fifth starter spot in the Phillies rotation is 24-year-old lefty, Damon Jones, who has been the best pitcher this season in the entire Phillies organization.

I have been a faithful Phillies follower all my life. Today I am most intrigued by those players in the minor league system who work every day of the year to make it to the Show. This is what this blog is mostly all about. To read more, click here: https://baseballross.wordpress.com/2012/02/05/how-i-got-started-in-baseball/
View all posts by Baseball Ross →
This entry was posted in 2019, June and tagged Baseball Betsy, Damon Jones, Philadelphia Phillies. Bookmark the permalink.