Clearwater Threshers Off To A Strong Second-Half Start Winning 7-5 on MiLB.TV, Led By Long Balls of Stokes and Duran

The Clearwater Threshers finished second in the first half of the Florida State League Northern Division. They put on a strong show of power in a 7-5 win over the Bradenton Marauders last night to start the second half.

The three-game Bradenton series are the only Threshers’ games that are on MiLB.TV this season. Only Bradenton televises home games in the Florida State League. 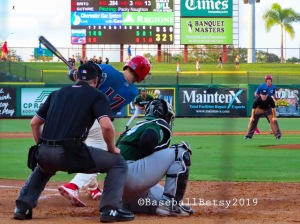 The Threshers were led by a two-run homer by Madison Stokes and a solo homer by Rodolfo Duran. It was a team effort as seven of the nine hitters in the lineup contributed either a run scored or an RBI. 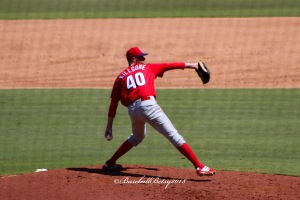 Closer Keylan Killgore picked up the save and is still perfect going 7 for 7 this season. He is 17 for 17 in save opportunities in his two year Phillies minor league career. His fastball was topping at 94 mph.

The player to watch in the lineup and on the field is Duran. Especially, since the 21-year-old will be Rule Five eligible in December.  Duran had a breakout 2018 season hitting 21 homers including three in the playoffs with Lakewood.

This season he got off to his usual slow start buried in a three catcher Threshers rotation. Now seeing more action, Duran is heating it up just as he did last season in June when he hit .397 with 7 homers in the Sally League.

Duran hit his second home run of the month when he lined a homer into the seats in left at Bradenton. The homer was the sixth Threshers’ run and it held-up as the game winner.

Duran has been on a tear in June. In nine games this month, he is hitting .323 with his two homers and eight RBIs.

Defensively, Rodolfo leads all Phillies minor league catchers this season by throwing out 38% of base stealing attempts. He has been fun to watch behind the plate since he has played error-free baseball in 383 chances this season.

The Phillies have time to continue to evaluate corner infielder-left fielder Madison Stokes, who is only in his second season in the Phillies organization. On the other hand, they must make a decision on Duran whether to protect him on the 40-man roster at the end of the season or expose him in the Rule Five draft in December. He is now in his fifth season after being signed as an international free agent out of the Dominican Republic.

I have been a faithful Phillies follower all my life. Today I am most intrigued by those players in the minor league system who work every day of the year to make it to the Show. This is what this blog is mostly all about. To read more, click here: https://baseballross.wordpress.com/2012/02/05/how-i-got-started-in-baseball/
View all posts by Baseball Ross →
This entry was posted in Uncategorized and tagged Baseball Betsy, clearwater Threshers, Keylan Killgore, Madison Stokes, Philadelphia Phillies, Rodolfo Duran. Bookmark the permalink.

1 Response to Clearwater Threshers Off To A Strong Second-Half Start Winning 7-5 on MiLB.TV, Led By Long Balls of Stokes and Duran