Should Jhailyn Ortiz Move Up and is Dalton Guthrie Breaking Out?

Watching minor league baseball is all about following the comings and goings of players. Minor league winning is of little interest to major league front offices. For example, last season the Phillies minor league chief at the time resigned and left town the morning of the start of the Florida State League playoffs which the Clearwater Threshers had just qualified.

It’s all about developing players and moving them up the organization as quickly as possible. When former Threshers players that we had watched earlier in the season get the call up to a higher level, we feel good about it. Two former Threshers did come up big on Sunday for Reading. Alec Bohm hit his first AA home run and Damon Jones pitched a two-hit, six inning shutout. Watch Bohm’s first AA home run, HERE.

Now, it is everyone’s job is to keep the prospects moving on up. It might be more difficult to see Jhailyn Ortiz get the call to Reading. Not that he does not deserve it, but he is only baseball age 20. In the first seven games of the second half of the FSL, it certainly looks like he is ready to jump on a jet plane to AA, ASAP!

Even in yesterday’s 7-5 Threshers loss, Jhailyn had two base hits including driving a 96 mph fast ball through the 5-6 hole to left for a base hit. On Thursday night, he hit a slider up in the zone over 400 ft. for a grand slam. Watch his post game interview HERE.

In his last six games, Ortiz hit five homers, drove in 11 runs and went 9 for 24. What is more amazing, several of his long balls have been over 400 ft. in a league not noted for giving up tape measure home runs. 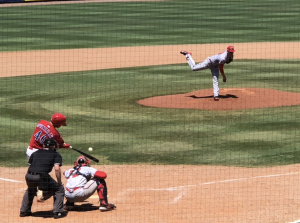 Who is next on the up elevator in the Phillies minor league system? In the second half of the FSL, the Threshers infielder Dalton Guthrie has thrown his name into the mix. He has come out of now where to go 10 for 18 with three doubles and a triple in his last five games. He is playing this season at baseball age, 23. Watch his double in Sunday’s game:

The thing that impressed me the most this weekend was the strong arm that Guthrie showed while playing shortstop. Dalton’s strongest position seems to be second base where he has not committed an error in 16 games. He has been charged with three errors at short in 17 games and one error in his two starts at third.

Two names to watch on the Threshers rosters to move up are corner outfielder Jhailyn Ortiz and middle infielder Dalton Guthrie. They are both breaking out and off to great second half starts in the FSL. We are pulling for them to move up!

I have been a faithful Phillies follower all my life. Today I am most intrigued by those players in the minor league system who work every day of the year to make it to the Show. This is what this blog is mostly all about. To read more, click here: https://baseballross.wordpress.com/2012/02/05/how-i-got-started-in-baseball/
View all posts by Baseball Ross →
This entry was posted in Uncategorized and tagged Alec Bohm, Baseball Betsy, clearwater Threshers, Dalton Guthrie, Damon Jones, Jhailyn Ortiz, Philadelphia Phillies, Reading Fightin Phils. Bookmark the permalink.