Danny Mayer Is Finally Given A Chance To Play, Then Moves Into Phillies MLB Prospect Status

Danny Mayer was a 31st round draft pick as a 6’5″ 245 lbs. corner outfielder by the Phillies in 2017. He was never given much playing time by the experts in the minor league department.  All of the sudden he has played played six games in the last six days and clubbed three home runs. In this morning’s game for Clearwater, he hit a two-run single in his second at bat to get the Threshers off to a 3-0 lead over the Palm Beach Cardinals before the rain came. 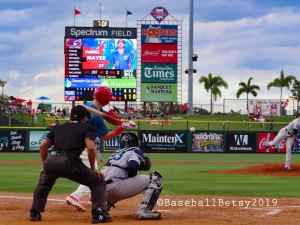 Up until the last week or so, Mayer has been the very definition of a fourth outfielder who rarely played. When he was in the lineup, he hit the long ball. He has 9 homers in only 119 at bats this season. He has an OPS of over .8oo because of his power. Compare this to Jhailyn Ortiz who leads the Threshers in homers with 14 but has only a .699 OPS in 271 at bats.  Just think if Mayer had 150 more at bats at this point in the season.

Now the experts have him leading off and playing first base in this morning’s game. Who knows what these experts will do with Mayer next?  What ever it is, he has earned his way up in the Phillies system and he has to be glad just to get a chance to play. Danny is proving he is a legitimate MLB  prospect.  All he needed was a chance.

I have been a faithful Phillies follower all my life. Today I am most intrigued by those players in the minor league system who work every day of the year to make it to the Show. This is what this blog is mostly all about. To read more, click here: https://baseballross.wordpress.com/2012/02/05/how-i-got-started-in-baseball/
View all posts by Baseball Ross →
This entry was posted in 2019, July and tagged Baseball Betsy, clearwater Threshers, Danny Mayer, Philadelphia Phillies. Bookmark the permalink.