It just does not get any better that this-sitting down on a late Sunday afternoon to follow the Williamsport game on the internet and be rewarded with some of the best four opening innings of baseball of any game I have ever followed.

Bryson Stott makes his first start start of the season at second base after playing at shortstop. He homers in the first inning with two outs to give Williamsport a quick 1-0 lead over State College.  It was his fourth homer in his 26th game for the Crosscutters. 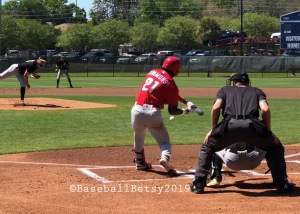 In the second inning with the bases loaded, Kendall Simmons, who moved over to shortstop, hits a grand slam to get the Crosscutters out to a 7-0 lead. For Simmons it was his ninth homer of the season and his seventh long ball in his last 13 games.  He has hit the nine homers in only 113 at bats. The NY-Penn league home run leader has ten homers in 184 at bats.

Then comes the fourth inning and the two Crosscutters’ sluggers are not done.  Simmons works a 3-2 count for a walk. Up next, Stott hits his second home run of the game and fifth of the season for the Crosscutters to give them a 9-1 lead after just four innings. Read HERE.

We can only dream of the day when Stott and Simmons play in the middle of the Phillies infield and combine to drive in seven runs with three homers in the first, four innings of a MLB game.

Hopefully, these two guys will get a chance to show what they can do at a higher level in the Phillies system before the minor league season ends. They have earned the right to move on up!

I have been a faithful Phillies follower all my life. Today I am most intrigued by those players in the minor league system who work every day of the year to make it to the Show. This is what this blog is mostly all about. To read more, click here: https://baseballross.wordpress.com/2012/02/05/how-i-got-started-in-baseball/
View all posts by Baseball Ross →
This entry was posted in 2019, August and tagged Baseball Betsy, Bryson Stott, Kendall Simmons, Philadelphia Phillies, Williamsport Crosscutters. Bookmark the permalink.