Rixon Wingrove is only 19-years-old but he is emerging as the Phillies top first base prospect. In Saturday’ action, he paced the Adelaide Giants to a sweep of a doubleheader and a tie for first place with the Perth Heat in the Australian Baseball League. 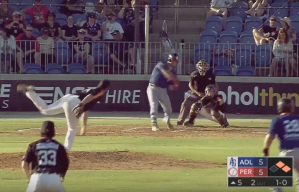 Big Rix singled in the winning run for the 6-5 victory in the first game and hit two doubles driving in the second run in the second game to contribute to a 3-0 win.

Adelaide is now tied for first in the Southwest Division with Perth at 12-7. The big final game of the four game series for sole possession of first place is scheduled for Sunday at 3 am EST for us here in Florida. Read HERE

Wingrove leads the Giants with 16 RBIs this season after leading the Gulf Coast League in RBIs for the GCL Phillies this summer.

The only flaw in Wingrove’s game is he strikes out a lot. When he puts the ball in play he is has gone an incredible 17 for 38 with two homers in 19 ABL games.

The Phillies have shutdown for the season Kyle Glogoski who pitches for his hometown Auckland Tuatara. Kyle was bothered by the long ball in the ABL giving up five homers in 19.2 innings. He struck out 19 in 17.2 innings.

Concerning injury news came out about another Phillies pitching prospect, Josh Tols. He pitches for Melbourne and was taken out after one inning in his Saturday start. Tols had pitched to a 2.83 ERA and struck out 22 in 19 innings.

I have been a faithful Phillies follower all my life. Today I am most intrigued by those players in the minor league system who work every day of the year to make it to the Show. This is what this blog is mostly all about. To read more, click here: https://baseballross.wordpress.com/2012/02/05/how-i-got-started-in-baseball/
View all posts by Baseball Ross →
This entry was posted in 2019, December and tagged Baseball Betsy, Josh Tols, Kyle Glogoski, Philadelphia Phillies, Rix Wingrove. Bookmark the permalink.