Remember The Name Jacob Waguespack, In The Last Week He Has Struck Out 18 in Two Starts In The Blue Jays System

How about those Phillies teams.  Can you believe it!  The Phillies, the IronPigs, the Threshers, the Blue Claws and the GCL Phillies East teams are all in first place in their divisions as we start the day. The Phillies and the Threshers are on top by only  a half game. Even the IronPigs are selling five-game playoff packets.  Enjoy it while it lasts!

At the minor league level it is still about player development.  In reality little emphasis is placed on the playoffs but it is nice to talk about them.  Player movement continues at a rapid pace with the minor league season having only about 25 games left in the regular season. 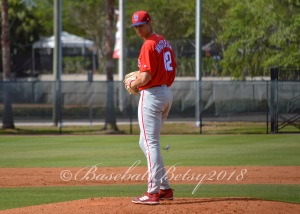 One player who the Phillies traded away at the deadline may come back to haunt them. Last night Jacob Waguespack won his first game for Buffalo, the Toronto AAA team.  In two starts there, the tall right-hander has struck out 18 in 11.2 innings.  He never got much of a chance in the Phillies organization after bouncing around the system for a couple of years. Right now he looks like a September call-up for the Blue Jays.  The guy they got in return, Aaron Loup, so far can’t get anybody out as a LOOGY out of the Phillies bullpen.

Good new came last night from Reading’s closer Edgar Garcia.  He struck out the side in the ninth to finish off Akron in a 6-1 win.  Edgar has struggled most of the summer after a great spring out the Fightin Phils bullpen.  He found his fastball command last night by painting the outside corners of the plate in getting two, called strike threes.

Reading is all but out of playoff contention but they just received starter McKenzie Mills from Clearwater. In his last start Mills picked up his second win in 16 starts on the season for the Threshers with a seven inning, four-hit shutout.

Let’s finish up with a story on a former Phillies farmhand who they release several years ago.  Now in the Twins minor league system after a brief appearance for them in the MLB, Willians Astudillo pulled off the old “hidden ball trick”. In a game for the Rochester Red Wings against Toledo, the Tigers AAA team, he did it playing third base and in front of the Mud Hens manager coaching third base.  Watch HERE.

Do me a favor! Remember the name Jacob Waguespack.  He caught our attention and apparently the scouts of the Blue Jays when he pitched brilliantly for the IronPigs in the 2017 International league Playoffs. Read HERE.

I have been a faithful Phillies follower all my life. Today I am most intrigued by those players in the minor league system who work every day of the year to make it to the Show. This is what this blog is mostly all about. To read more, click here: https://baseballross.wordpress.com/2012/02/05/how-i-got-started-in-baseball/
View all posts by Baseball Ross →
This entry was posted in 2018, August, Uncategorized and tagged Baseball Betsy, Baseball Ross, clearwater Threshers, Edgar Garcia, GCL Phillies East, Jacob Waguespack, Lakewood BlueClaws, Lehigh Valley Iron Pigs, Mckenzie Mills, Philadelphia Phillies, Reading Fightin Phils, Toronto Blue Jays, Willians Astudillo. Bookmark the permalink.