Nothing beats a walk-off home run. The home crowd goes wild. Gator-Aid flies over the heads of the team at home plate and everyone goes home happy. Have two of them hit  with-in an hour of each and one be a grand slam, that is something special we will never forget. This is what happened last night for Phillies fans. 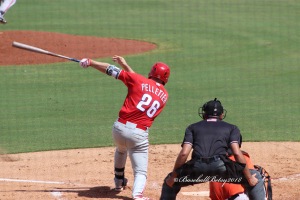 Over in Lakewood for the BlueClaws, Ben Pelletier, who has struggled most the season, hit a two-run, walk-off, two run homer with two out in the bottom of the ninth for a 3-2 win over the Delmarva Shorebirds in the Sally League. Watch HERE. Less than an hour later, we watched Bryce Harper hit a walk-off grand slam for a 7-5 win with one out in the ninth inning over the Chicago Cubs. Watch Harper’s HERE.

We have been following Ben Pelletier ever since he signed with the Phillies back in July of 2015 as a 16-year-old, drafted in the 34 round out of Quebec. He turns only 21 on August 22. He started slowly this season, hitting under .200 most of the season until August. So far this month, Ben is hitting .324 with two homers and an OPS of .998. That’s the Ben we knew coming up in the Phillies system.

Bryce Harper also got off to a slow start with the Phillies after signing his big free agent contract. He too has come to life in August with a high of 7 home runs and OPS of 1.033 already in the month.

Someday, we could see a Phillies outfield that has Ben Pelletier in left and Bryce Harper in right. In any event, we will never forget the night they both hit “walk-off” long balls.

I have been a faithful Phillies follower all my life. Today I am most intrigued by those players in the minor league system who work every day of the year to make it to the Show. This is what this blog is mostly all about. To read more, click here: https://baseballross.wordpress.com/2012/02/05/how-i-got-started-in-baseball/
View all posts by Baseball Ross →
This entry was posted in 2019, August. Bookmark the permalink.